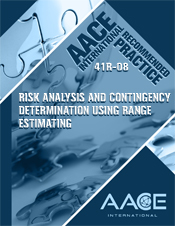 This recommended practice (RP) of AACE International describes the process known as range estimating, a methodology to determine the probability of a cost overrun (or profit underrun) for any level of estimate and determine the required contingency needed in the estimate to achieve any desired level of confidence. The process uses range estimating and Monte Carlo analysis techniques (as defined in RP 10S-90). The RP provides the necessary guidelines for properly applying range estimating and Monte Carlo analysis to determine probabilities and contingency in a reliable manner using any of a number of commercially available risk analysis software packages.

The RP does not recommend any particular software. Rather it describes the factors that the analyst must consider when using risk analysis software for probability and contingency determination.

This RP is intended to provide guidelines (i.e., not a standard) for risk analysis using range estimating that most practitioners would consider to be a good practice that can be relied on and that they would recommend be considered for use where applicable.
This RP is also intended to improve communication as to what the practice called “range estimating” is. Many of the methods found in industry that are being called this are not in accordance with this RP. Practitioners should always make sure that when someone uses the term “range estimating”, that they are talking about the same practice recommended here.

This RP is based upon the successful efforts of many companies to evaluate project risk and contingency using the range estimating techniques originally developed by Michael W. Curran[1,2,3]. Users should be aware that the principles outlined in this RP must be rigorously followed in order to achieve the desired results. Failure to follow the RP’s recommendations will likely lead to significant misstatements of risk and opportunities and of the amount of required contingency. In the great majority of cases, contingency and bottom line uncertainty are understated when the RP’s recommendations are not followed.