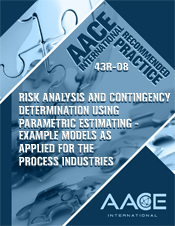 This recommended practice (RP) is an addendum to the RP 42R-08 titled Risk Analysis and Contingency Determination Using Parametric Estimating. It provides three working (Microsoft Excel®) examples of established, empirically-based process industry models of the type covered by the base RP; two for cost and one for construction schedule. The example models are intended as educational and developmental resources; prior to their use for actual risk analysis and contingency estimating, users must study the reference source documentation and calibrate and validate the models against their own experience.

This RP summarizes three landmark empirically-based models; the “Hackney” model, first presented in John Hackney’s 1965 text Control and Management of Capital Projects (later expanded on in 1992, and now an AACE publication-reprinted 2002), and the later two “RAND” models. The RAND cost model is from 1981 research by Edward Merrow et al. for which Mr. Hackney was a consultant. The RAND construction schedule model is from 1986 research by Christopher Myers et al. building on the 1981 cost research. These models posit plausible causal relationships between cost growth (i.e., contingency usage) and schedule slip and various risk systemic drivers such as the levels of development of process and project scope information and the level of process technology. They present similar empirical and quantitative analysis of the reasons for inaccurate estimates of capital costs and schedule duration and provide tools to improve assessment of the commercial prospects of projects at early stages of scope development and/or using advancing technologies. Prior to these models, the literature on the causes of cost and schedule growth for process plants provided little consensus about the relative contribution of various risk factors. Therefore, the authors of the source documents measured the factors and statistically assessed their relative influence on cost and schedule growth for process plant projects undertaken in North America. The results of their work had a significant impact on the practice of cost engineering and the evolution of project management phase-gate scope development systems (i.e., these studies are a basis of AACE’s RP on classification of cost estimates; RP 18R-98).

While this document attempts to summarize the basis of the models, it is highly recommended that users review the source documents before using the tools as a basis for their own study or development. Instructions for using the tools themselves are included in worksheets